Forum Post / Reply
You must log in before you can post or reply to messages.
Current Page: 3 of 4
Re: Digital Display Gages
Monday, December 17, 2007 11:28 AM
Cr0nuS
I'm very interested. Any news or examples of a final production along with price?

Re: Digital Display Gages
Monday, December 17, 2007 5:24 PM
Mr. Quick
I won't have a good mockup for a few more weeks, and the functioning prototypes probably until late February. As soon as I get something good to check out, I'll post it up.

I'm shooting for a price range of around $500, but until I get the cost for all of the components, I won't know for sure. It will be cheaper than a DD setup, and not much more than buying individual digital gauges, but it will be plug and play.

...the digital faces ive always liked have been completely black when u look at them as if no gauges are there, and then u turn the car on and they light up i think those make the neatest effect.

That's exactly how I'm designing them. For the 95-99 Fire, since the face is already one piece, that whole piece would be glossy black when off. For the rest of them, I'm planning on leaving the bezel alone, and just replacing the gauge face, which would be the same gloss black when off. I may change this, depending on feedback once I get it mocked up and post a picture. This change will not affect the circuit board design at all, just the mounting points, so I can play with it quite a bit to decide how to do it.

Re: Digital Display Gages
Tuesday, December 18, 2007 10:43 AM
Todd N
Wow, what a great idea! I've only had my Fire for a few weeks, but the idea of a plug-n-play digital setup sounds great. Many years ago I had a Buick Somerset with the digital setup...and I love it. And I had a Cadillac Seville with a digital dash. The difference there was things like fuel, temp, and oil pressure had digital bar readings instead of numerical readings, which was great. The color was more of a green/blue flouresent. A question I'd have is how are these going to be readible in bright sunlight, i.e., top down cruising? I've seen some digital dashes completely 'wash out' in bright sunlight. I look forward to seeing your progress.

Re: Digital Display Gages
Tuesday, December 18, 2007 11:27 AM
666 night rider (TGM)
i would probably buy one from you. i think it would be sweet if you could use black lights for the gauges

A question I'd have is how are these going to be readible in bright sunlight, i.e., top down cruising? I've seen some digital dashes completely 'wash out' in bright sunlight. I look forward to seeing your progress.

They will be fairly vivid, so I'm hoping they are not a problem in the sunlight. When I get a prototype done, I'll bring it outside on a bright day and see how it looks.

I've wanted another digital dash since I sold my old camaro.

Re: Digital Display Gages
Wednesday, December 19, 2007 6:54 PM
Mr. Quick
OK, well I got a sample of the polycarbonate that I'll most likely be using for the face, and fit it into the cluster. It's a little hard to tell in the picture because of the flash, but it's completely blacked out unless you put light from behind it. Ignore the wings where the warning lights go for now. I'm working on that, and they will match, but they will be made out of different material.

I just figured I'd throw a picture up to show you what they should look like. Questions, comments, etc...all welcome good or bad.

Re: Digital Display Gages
Friday, December 21, 2007 3:39 PM
Mr. Quick
As of right now, I have not yet addressed the odo. The way I'm working the units, the factory one can still be used. However, I don't like the idea of having a mechanical odo with a digital dash, and the late 98's and 99's don't exactly match the displays I'm using. I want to get the main pieces of the design handled, then I will address the odo. The prototypes will have a factory one, though. When I do address the odo, I will definitely make it possible to update the mileage.

On another note, I have a 'Fire cluster, and I'm working on that now. There are some things about the fire clusters that make things easier, and some things that present other challenges, but they should look sweet when done.

Fire cluster with lens in place for you Pontiac guys. 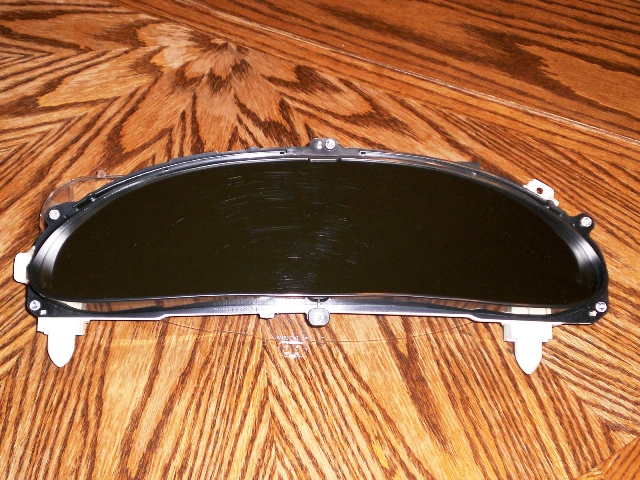 and a quick test with a few 1/2" displays modules lit up: 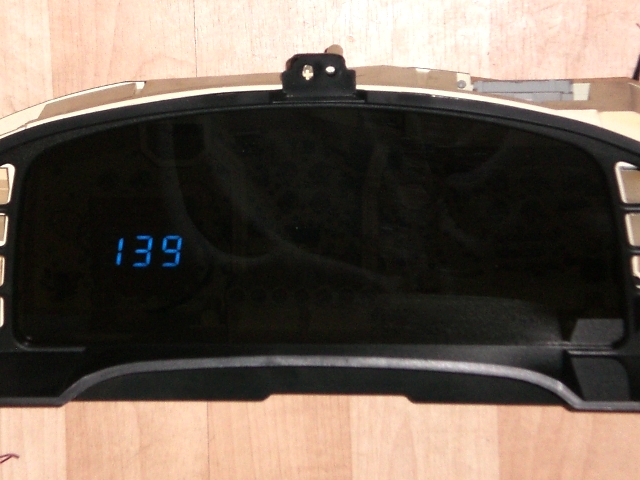 On another note, I have a 'Fire cluster, and I'm working on that now

So I take it you don't need the circuit board... I've been trying to track mine down, but its in my spare room / storage room, probably in one of the umpteen millions of boxes of parts....

Fire cluster with lens in place for you Pontiac guys.

If I get tired of my setup, I know who to ask for a new one

Re: Digital Display Gages
Saturday, December 22, 2007 4:57 AM
Mr. Quick
Rob, if you happen to come across it, I could still use it, but I scored a full cluster for a price I couldn't refuse.

Do you think below freezing temps ( I live in MN) will effect/hurt them any.. (make them sluggish for awhile like my stereo face).... and whats the average lifespan for something like this (before lights start burning out) ?

And another thing.... will you be making these for an extended period of time... or for just a short while? (I need a new tranny... ie.. low on burnable cash)

Re: Digital Display Gages
Tuesday, December 25, 2007 8:52 AM
Mr. Quick
Weeble, for the life of gauges, and the cold weather performance, they are LED, so I'm not expecting any issues. LEDs last for a long long time, and I've never seen any performance issues in cold weather.

As far as how long I plan on making them, I'm hoping to keep this going, not only for the J-body, but spanning out into other vehicles. I've been designing it as something I can carry to other platforms with only minimal adjustments, to keep it cost effective (I don't want to have to completely redesign for every vehicle).

Thanks for the compliment on the design. I like OEM styling, so I'm trying to make it look as non-aftermarket as possible, yet still give you something different and customizeable to your vehicle (hence the 4 color options).


Looking awesome! I'm in if Im pleased with the results...

Re: Digital Display Gages
Friday, December 28, 2007 5:56 AM
CAVCRZY
Looking good! I will definitely keep my eye on this!

Re: Digital Display Gages
Saturday, December 29, 2007 8:59 AM
Mr. Quick
Glad to hear the interest guys. If anyone has any suggestions or thoughts on design, I'm looking for as much feedback as possible.

Just as a little update, the engineer that's working on the circuit for me is backed up with another project right now, so I'm on the back burner for the moment. I'm supposed to talk to him next week to firm up a couple of design components, then it should start moving forward again. I'm really hoping to have a couple of working prototypes by February, but since we're almost in January and the circuit layout isn't finished yet, it might not happen.

Re: Digital Display Gages
Sunday, January 06, 2008 8:07 PM
alkatmsu
I know you already addressed the issue of the tach changing colors on redline, but what about the other numeric gauges? Say, the fuel light being blue for default, then changing to yellow at 30%, and red at 20%. Ditto for the temp and speed gauge. A temperatue readout means nothing to me, but if the temp light turned red, I'd notice it. It'd be even cooler if the end-user could customize at what values the lights change (different speed limits per states, etc).

Re: Digital Display Gages
Monday, January 07, 2008 7:50 AM
Mr. Quick
That's not a bad idea, but I have not yet seen any LED readouts capeable of more than one color. I could possibly add a warning light near the readouts if people are interested in that, or have the label change colors (for example, where it says "Coolant Temp", that could change to red, and maybe even flash, if it got over a safe limit.

Re: Digital Display Gages
Monday, January 07, 2008 9:10 AM
alkatmsu
I'm not sure of the inner workings, but I know the digital odo in my Cav used to be a yellowish orange with a white bulb, but now that I've put a blue LED in behind it, it's blue. Maybe you could have whatever makes the actual numbers and the light source be seperate like that, so it'd be possible to put 2-3 LEDs right behind it so it could change colors?

That's not a bad idea, but I have not yet seen any LED readouts capeable of more than one color. I could possibly add a warning light near the readouts if people are interested in that, or have the label change colors (for example, where it says "Coolant Temp", that could change to red, and maybe even flash, if it got over a safe limit.

if you want, I can get the mfg's part number for you.

When you come across a big kettle of crazy, its best not to stir it.